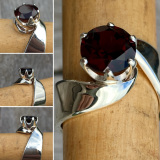 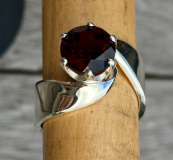 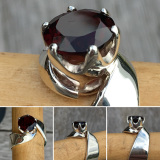 This is an amazing stone, mounted in a six prong crown mount and held by a sterling silver band, who's arms hold the stone in a loving Embrace. The stone is a 9mm Pyrope Garnet, which has a lovely depth of colour, the mount is a six prong crown mount, which is both beautiful and secure, while the band is 10mm wide, and 1.5mm thick which adds to the feeling of strength and security.

Pyrope Garnet bestows vitality and charisma, and promotes excellent quality of life, unites creative forces and is a stabilising force, and unites base and crown chakra.